Phil Rudd, left, jumped on his security guard’s back after leaving court in Tauranga

The Australian drummer of hard rock group AC/DC, Phil Rudd, has briefly appeared in court in New Zealand on charges of threatening to kill and possession of drugs.

The judge at the court in the North Island city of Tauranga briefly issued an arrest warrant for Mr Rudd, 60, after he failed to appear on time.

The warrant was withdrawn when he appeared minutes later.

Mr Rudd entered no plea and was remanded on bail until 2 December.

A charge of attempting to arrange a murder was dropped earlier this month. 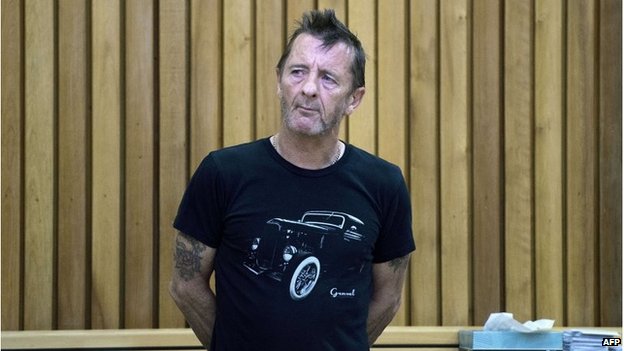 When he failed to appear, Judge Timothy Brewer issued a warrant for his arrest, saying it would be enacted in half an hour if Mr Rudd did not show.

Mr Rudd was in court when the hearing resumed about 15 minutes later.

Justice Brewer then sent the case back to the district court as police had dropped the charge of attempting to procure murder.

In court, Mr Rudd put on a show for the gallery, winking at the media and tapping a rhythm on the dock.

As he left, he jumped on his security guard’s back and was carried to his sports car.

Mr Rudd’s lawyer, Paul Mabey, has said his client will deny the threatening to kill charge and described the drugs charges as “minor”.

He said the case had …read more