Members of rock band AC/DC say they have not spoken to drummer Phil Rudd since he was charged with attempting to arrange a murder on 6 November.

Angus Young said they had had “a few problems” with Rudd while recording their latest album but his arrest “took everyone by surprise”.

“We haven’t had contact,” said Young. “He’s got himself in a pickle.”

“We had a few issues before with him,” said Young, speaking about Rudd during an interview in New York to promote their album Rock or Bust.

“Even when we were recording it was hard even to get to him to do the recording.”

“And then he was supposed to show up to do promos with us, to do video shoots and a few other things, and he never showed up for that either.

AC/DC is one of the highest grossing music acts of all time. Their best known hits include Highway to Hell and You Shook Me All Night Long. 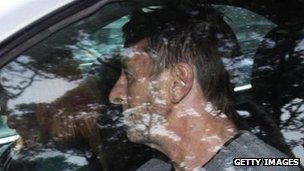 Rudd appeared in court in New Zealand earlier this month

Australian drummer Rudd was kicked out of the band in 1983 and rejoined in 1994. But his absence from a recent photo of band members prompted online speculation about whether he was still in the band.

New Zealand police had initially accused the 60-year-old of trying to arrange for a hitman to carry out two killings, but charges were dropped after 24 hours.

Chvrches singer speaks out on trolls

Chris Evans to face no charges over sexual...