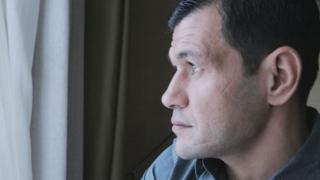 Abdullah Kurdi says Syria has “hundreds of thousands of problems”

The dad of a Syrian boy who drowned while fleeing his war-torn homeland has pleaded with the world for sympathy towards refugees.

Images of his three-year-old son’s dead body washed up on a beach in Turkey in September caused worldwide outrage.

Alan died along with his brother, five, and his mother while trying to reach the Greek island of Kos.