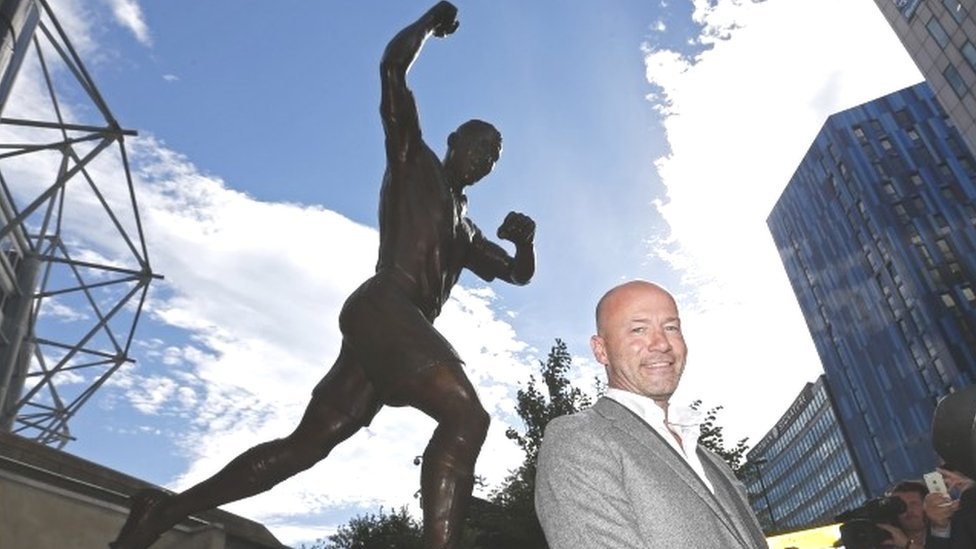 A statue to “properly recognise” the career of Newcastle United legend Alan Shearer has been unveiled outside St James’ Park.

Shearer attended the ceremony earlier and said he especially liked the 9ft 6ins (2.89m) tall statue because “it has hair”.

The £250,000 brass statue, paid for by the family of ex-chairman Freddy Shepherd, was kept under wraps since it was put in place on Friday.

Newcastle United has not commented.

Hundreds turned out to watch Shearer and Lord Mayor of Newcastle, Hazel Stephenson, unveil the statue, which shows his famous one hand in the air goal celebration.

Shearer said: “I’m very proud and honoured to be stood here with this statue.

“When I come down this road seeing it will make me immensely proud. It is here because I enjoyed playing football.”

The former England captain, now a BBC pundit, joined the club in 1996 for a then-record breaking £15m and went on to score 206 goals in 10 years, before becoming manager in 2009.

Mr Shepherd said: “It is now 10 years since he retired and our family decided that fans shouldn’t have to wait any longer for his unique career to be properly recognised.”

Former Blackburn Rovers and Southampton star Shearer scored 148 goals in 303 games for Newcastle – although won no silverware with the club – and netted 30 goals in 63 games for England.