A new production of William Shakespeare’s Henry IV, starring an all-female cast, has had warm reviews at the Donmar Warehouse in London.

Harriet Walter, as King Henry, was praised by the Arts Desk for her “quiet performance”.

The Daily Mail said the production, combining parts one and two, was “more commendable than enjoyable”. 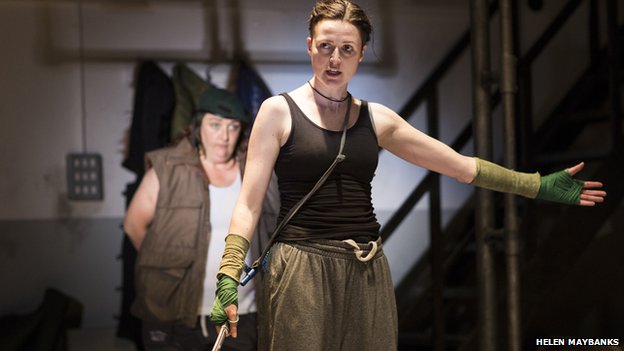 “One thing’s for sure, we are confronted with ‘real women’ of all shapes and sizes. They could easily have been recruited from a Scotland Yard identity parade.

“Harriet Walter in particular as the prison Don, who plays Shakespeare’s usurping King Henry, really does have the look of a leathery old lag.”

Praising the cast, which includes Cynthia Erivo from I Can’t Sing! The X Factor musical and Scottish comedian Karen Dunbar, the Arts Desk’s Alexandra Coghlan said: “There’s a pleasant friction to hearing the insults of the battlefield and tavern – “like a sick a girl”; “a woman’s mood”; “you are a woman, go” – in the mouths of this muscular, assertive troupe of women.”

Ashley McGuire was “a superb Falstaff” said the Evening Standard’s Henry Hitching, “mixing the predatory swagger of a wheeler-dealing geezer with notes of vulnerability, while Sharon Rooney from television’s My Mad Fat Diary makes a memorable stage debut as Hotspur’s affectionate wife”.