Andy Warhol depicted Elvis Presley as a cowboy in his artwork

Andy Warhol’s Triple Elvis has sold for $81.9m (£51.9m) at an auction of post-war and contemporary art in New York.

The 1963 work, which used ink and silver paint to depict the music icon as a gun-toting cowboy, was sold to an anonymous European telephone bidder.

Christie’s said the auction commanded a total of $852.9m (£540m), breaking its record for an sale of art of its kind.

Warhol’s two large portraits had been acquired by a German casino house in the 1970s.

The Presley image was one of 22 versions made by Warhol, while the Brando artwork – which repeats the same image four times – was one of only two, which were made in 1967. 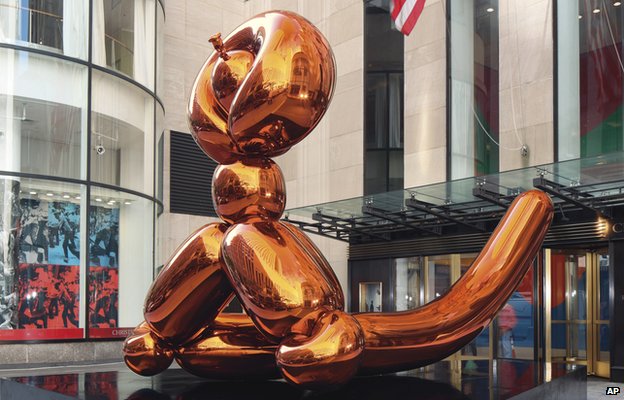 De Kooning’s life-size Clamdigger from 1972 stood at the entrance to his Long Island studio for four decades and sold for $29.2m (£18.5m).

An outsized sculpture of a monkey by Jeff Koons was another auction highlight, being snapped up for $25.9m (£16.4m).

But Balloon Monkey (Orange) failed to match the $58.4m (£37m) price paid for Balloon Dog (Orange) last year, which earned Koons the title of the most expensive living artist.