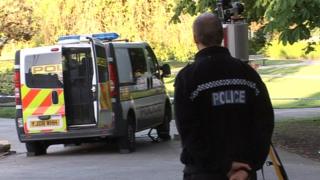 The van rolled down a slope trapping Donald Bennett underneath it

The family of a man killed by a runaway police van have claimed “significant failures” by West Yorkshire Police played a part in his death.

Donald Bennett, 83, died after he was trapped under the vehicle in Pudsey Park in Leeds, where he was eating an ice cream on his way to watch bowls.

A Wakefield Coroner’s Court jury found his death in June 2013 was accidental.

The inquest heard an officer applied the van’s handbrake after parking it on a slope, but did not leave it in gear.

The court was told that about two minutes after PC Claire Bugler left the vehicle, it rolled down the slope, hitting Mr Bennett, who died from chest injuries.

First prison unit for extremists to open this...