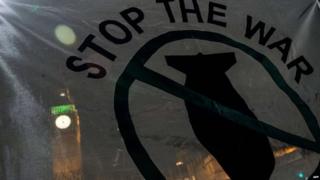 Corbyn urged to ‘step back’ from Stop the War coalition

A former shadow minister has called on Jeremy Corbyn to “step back” from the Stop the War Coalition, calling them a “disreputable organisation”.

Tristram Hunt said the anti-war group, which Mr Corbyn once chaired, had been “irresponsible” before and after the vote on Syria air strikes.

The Labour leader, he said, should not attend a fundraising event this week.