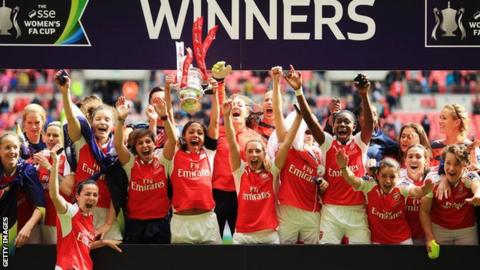 Carter, who clipped a first-minute chance onto the roof of the net, gave the Gunners a deserved early lead with a fine solo run and curled finish.

The England striker lacked direction with her first-half strike after running through, allowing goalkeeper Sari Van Veenendaal to save at the near post.

Ji So-Yun also went close after the break, shooting wide following their first corner after 70 minutes but the Gunners were excellent value for the victory.

Arsenal’s greater mobility, movement in midfield and high-pressing was key to their fast start.

Jordan Nobbs, Fara Williams and Carter were key in denying space and stopping the supply line to Chelsea’s front four.

The high-tempo approach set the tone for Arsenal’s impressive display and the margin of victory – against a Blues side who had won all seven of their matches so far this season – should have been greater.

Carter’s sensational first-half strike was a fitting way to win an intriguing final in front of a record crowd.

Some nimble footwork saw her cut inside Hannah Blundell and send a glorious strike curling into the far post.

But the Gunners wasted numerous chances to avoid a nervy finale.

The most notable opportunities fell to the otherwise excellent Oshoala, who wasted two good chances when through on goal, and Josephine Henning, who headed wide from a corner …read more

Derby County's Jacob Butterfield arrested at his own...