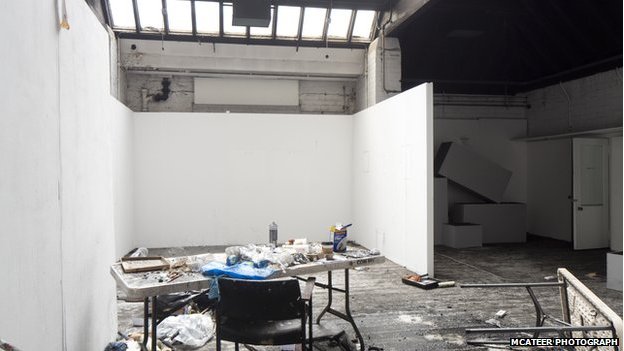 The fire started in a basement studio, similar to this, being used for a student’s end of year exhibition

An investigation into the fire at Glasgow School of Art has concluded it was caused by flammable gases from a canister of expanding foam.

The Scottish Fire and Rescue Service (SFRS) report said the gases ignited as they came into contact with the hot surface of a projector in Studio 19.

Its report, compiled over six months, follows the fire on 23 May.

It said flames spread through the landmark building from the studio used by a student for an exhibition.

The student has not been named.

The Mackintosh building, completed in 1909, is widely regarded as the finest work built by Charles Rennie Mackintosh, Scotland’s most influential architect and designer.

The report into the fire said voids in the walls and old ventilation ducts allowed the fire to take hold in neighbouring studios and spread upwards destroying the Mackintosh library, which was recognised as being one of the finest examples of art nouveau in the world.

An improved fire protection system was being installed at the time of the blaze but was not operational, the report said.

GSA director Professor Tom Inns said the fire was a “horrible accident” and a review would seek to learn lessons from it.

He said: “Obviously there are many features in the building which contributed to the fire – those are the things that are highlighted in the report.

“So we need to think about, as we go into the restoration process for the building, what things we need to take on board, what lessons we can learn from that, …read more

iPlayer 'loophole' to close on 1 September