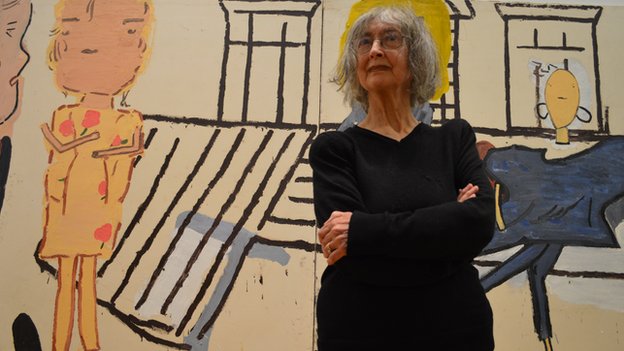 Rose Wylie won for her painting PV Windows and Floorboards

Artist Rose Wylie has won one of the UK’s most prestigious painting awards at the age of 80.

The £25,000 John Moores Painting Prize, which has been handed out in Liverpool, is Wylie’s latest accolade after being belatedly discovered by the art world.

Her paintings have begun to receive recognition in the past five years.

In 2013, Wylie, from Kent, staged an exhibition at Tate Britain and was described as “a national treasure” by fellow artist Cornelia Parker.

Unlike the Turner Prize, which excludes artists over the age of 50, the John Moores Prize has no age limit.

Wylie won for her painting PV Windows and Floorboards.

The prize victory comes 60 years after she began studying at Folkestone and Dover School of Art. But she received more attention at the time as a model in an advertisement for Aero chocolate bars.

After marrying artist Roy Oxlade, who died earlier this year, Wylie gave up painting to raise their family.

She resumed her art training at the Royal College of Art while in her mid-40s.

But more years passed before she began to receive recognition on the art scene.

In 2010, at the age of 76, she was selected to represent the UK in the Women to Watch exhibition at the National Museum of Women in the Arts in Washington, which showcases up-and-coming artists.

She received a Paul Hamlyn Award for Visual Art in 2011 and her first retrospective was selected as the opening exhibition of the Jerwood Gallery in Hastings in 2012.

Wylie’s work has recently been exhibited in …read more

Man Booker winner to be announced