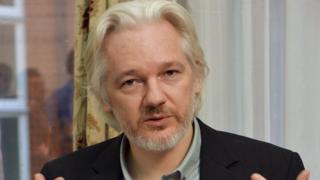 Julian Assange ‘will surrender’ if UN rules against him

Wikileaks founder Julian Assange has said he will turn himself over to UK police on Friday if a UN panel rules he has not been unlawfully detained.

In a statement on Twitter, Mr Assange said he would accept there was “no meaningful prospect of further appeal”.

He has been fighting extradition to Sweden where he faces and allegation of sexual assault, which he denies.

Mr Assange has not left the Ecuadorian Embassy in west London, since June 2012 after being granted asylum.

The UN’s Working Group on Arbitrary Detention is due to announce the findings of its investigation into Mr Assange’s case on Friday.

Mr Assange, who entered the Ecuadorian Embassy after the UK Supreme Court ruled the extradition against him could go ahead, asked the panel to examine his situation in September 2014.

Wikileaks has posted secret US government documents on the …read more