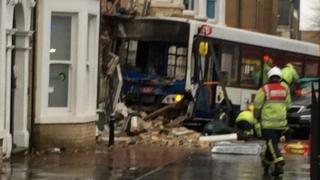 At least 13 hurt as bus hits building in Peterborough

At least 13 people have been injured when a bus crashed into a building.

The single-decker crashed in Peterborough city centre at about 11:43 GMT, according to Cambridgeshire Police.

There were no fatalities and none of the casualties are in a “time-critical” condition, the ambulance service said.