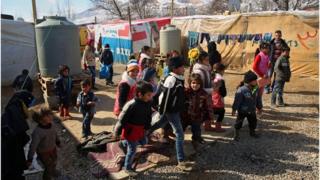 Syrian refugee children at a camp in Lebanon. A BBC/ComRes poll has found more people think fewer refugees should be allowed to come to Britain.

Attitudes towards allowing refugees into Great Britain have hardened, a survey for BBC Local Radio suggests.

The figure was 31% in September 2015, after the publication of photographs of two-year-old Syrian Alan Kurdi, who drowned off the coast of Turkey.

Theresa May in 'lowest' corporation tax pledge to...