Titlow said: “the composition and back light was so perfect that I had to capture the moment”

Fashion photographer David Titlow has won the Taylor Wessing Photographic Portrait Prize for a shot of his baby son meeting a dog for the first time. 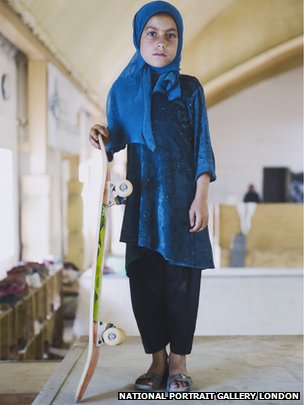 The composition was captured by Titlow the morning after a large midsummer party in Sweden and has won the former musician a £12,000 prize

Second place was awarded to Jessica Fulford-Dobson for her portrait of a young Afghani girl with a skateboard.

Of his winning shot, Titlow said: “Everyone was a bit hazy from the previous day’s excess.

“My girlfriend passed our son to the subdued revellers on the sofa – the composition and back light was so perfect that I had to capture the moment”.

Head judge Sandy Nairne, who is director of the National Portrait Gallery, called Titlow’s portrait a “fascinating and compelling image”.

After sifting through more than 4,000 submissions from 1,793 photographers, the judges selected just 59 portraits for an exhibition at the National Portrait Gallery.

The runner-up, freelance photographer Jessica Fulford-Dobson, documented Afghan girls who attend Skateistan – an NGO born out of a small skateboarding school that met around an old, disused fountain in Kabul.

Puve’s twins were captured at their grandmother’s home

“It is here that, for a few hours a week, they are able to have some semblance of a childhood in a place that is detached from the war …read more