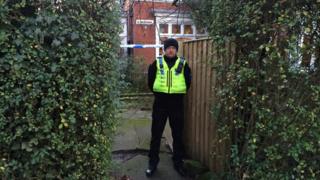 From the section Humberside

The body of a baby has been found in the drain of a garden at a house in Grimsby.

The body was discovered after a plumber was called by a couple who live in the property, Humberside Police said.

Officers were called to the house in Scartho Road at about 12:50 GMT.

Detectives are trying to establish the age of the baby and how long the body had been in the drain. A post-mortem examination is to take place on Monday.

Det Insp Christine Calvert said both the plumber and occupants of the house were in “extreme shock” following the discovery.

“The occupants of the house had …read more