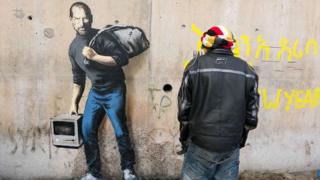 From the section Europe

The graffiti artist Banksy has created a new artwork in the so-called Jungle refugee camp in Calais depicting the late Steve Jobs, the founder of Apple.

The artwork shows Jobs, the son of a Syrian migrant, carrying an early Apple computer and a bin bag of possessions.

The work is intended to draw attention to the benefits of migration, Banksy said.

The artist, who has never revealed his identity, donated elements of a recent installation to the camp for shelter.