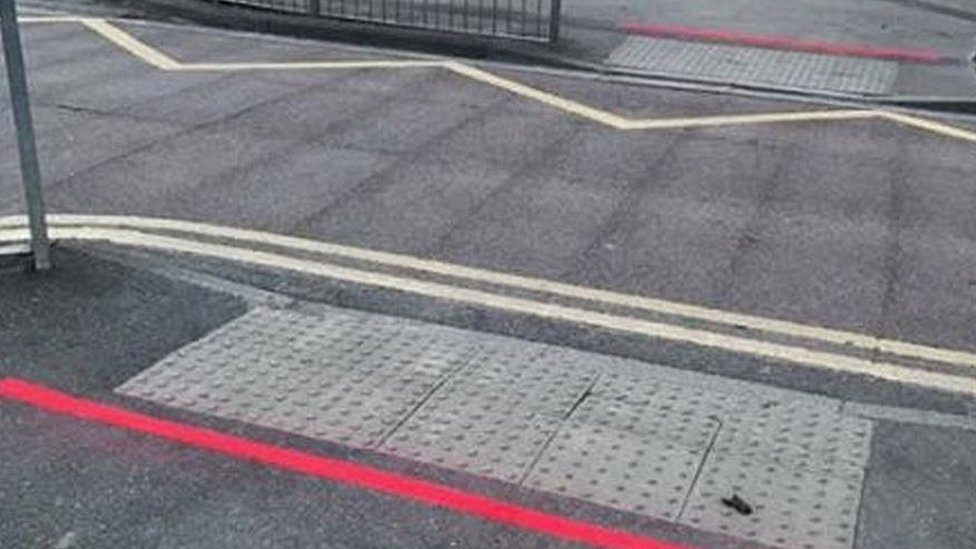 A man has painted red lines on a school crossing to help a lollipop lady manage pupils more effectively.

Mark Snowden was concerned children stood too close to traffic in Royston, Hertfordshire, and jostled the lollipop lady as she helped them cross.

“I painted red lines so she could tell them to stay behind them,” he said. “I’m like the Banksy of road safety.”

The county council said “unauthorised markings could confuse” and the red lines would be removed “if necessary”.

Mr Snowden said he realised there was “a problem” when he took his children to school on Burns Road in the town.

“I stood near the lollipop lady and the kids were all going right up to the edge.

“When she went out into the road to stop the traffic, they all wanted to follow her before she was ready,” he said.

“I thought if there was a red line, she could tell them to stand behind that until she was ready.”

He said he “secretly” spray-painted the lines on Thursday night, adding: “It worked. On Friday, they were all standing behind it.

“I don’t think I can get into trouble for keeping kids safe, but I’ll remove the lines if I’m asked to.”

The crossing is used by children attending both a primary and middle school on the road.

Mr Snowden posted a photo of his red lines on Facebook, which was widely praised by other parents.

Hertfordshire County Council said: “We completely understand parents’ desires for their children’s safety. However, inappropriate and unauthorised signs or road markings such as this can be confusing for other road users.”

Officials would visit the site and the lines would be removed if necessary, a spokesman said.

Line of Duty: All you need to know to get up to speed for series four

Mice on the loose in Hull Royal Infirmary...

Plea to save chickens from slaughter