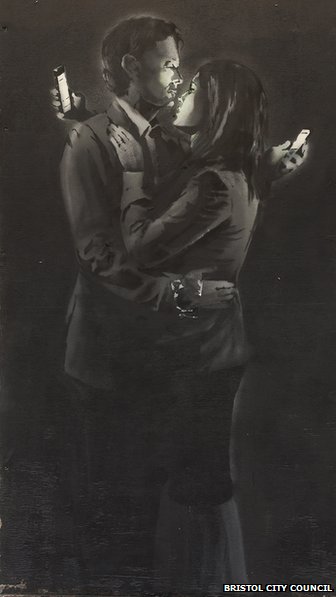 Banksy’s Mobile Lovers appeared in a doorway in April

A Banksy artwork has been sold to a private collector for enough money to keep the seller – a cash-strapped boys’ club – open for “a few years”.

The sale price of Mobile Lovers, which has been on display at Bristol Museum and Art Gallery, will be revealed on Wednesday when it is handed over.

The piece of street art appeared in a Bristol doorway in April, but a row broke out over who owned it.

Banksy then wrote to hard-up Broad Plain Boys’ Club saying it was theirs.

Broad Plain will be sharing a portion of the proceeds with a number of other voluntary sector youth clubs across the city.

Mary McCarthy, of MM Contemporary Arts, who negotiated the sale, said: “I won’t be revealing the buyer, but it’s a private individual, a philanthropist who was very keen on investing in young people’s institutions.”

Having lived in and around Bristol herself for many years, she said she had seen for herself the good the boys’ club does.

“I was able to find a buyer of significant value to be able to support them, not forever, but a little nest egg for a few years,” she said.

“It’s a very generous gesture [by Banksy], and it’s noteworthy that an artist risen from the street has given back so prominently to the street.”

The young people of Broad Plain and Riverside youth projects are creating their own “Thanks Banksy” wall in partnership with Young Bristol Creative Team.

It will be erected on the Broad Plain boundary fence facing the M32 into Bristol, acting both as a geographical pointer to the club, and as a visual thanks to Banksy himself.

Australia to compete at Eurovision

Harry Potter and the Cursed Child gets five...

H&M has made a short Wes Anderson film...