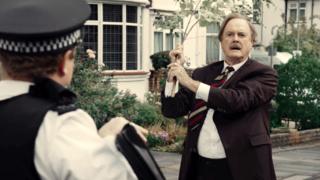 Cleese helped write the script with the ad team

Cleese has recreated the 1975 scene in which a frustrated Fawlty berated his broken down car before giving it a “damn good thrashing” with a branch.

Cleese agreed to rewrite the scene for Specsavers opticians as he thought it would be “genuinely funny”.

The ad sees Fawlty lose his patience with a sat nav and take out his anger on the wrong target – a police car.

“A lot of people have sent me Fawlty Towers scripts, or Basil scripts, and they were always absolutely awful,” Cleese said.

“But these people had an idea, and I have to say, I …read more

Beyonce is nominated for five NME Awards with...