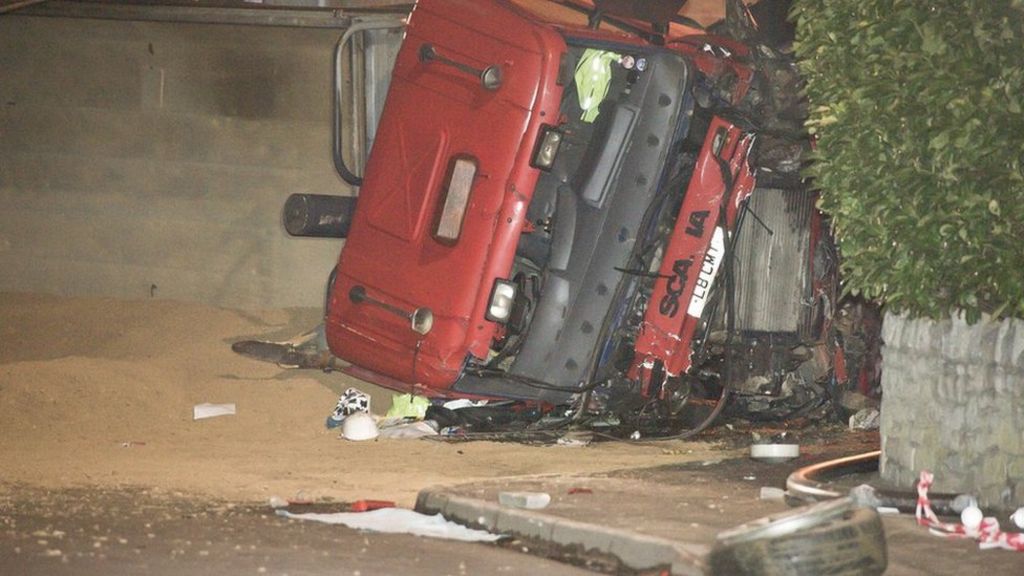 The owner of a lorry that crashed on a hill in Bath, killing four people, has admitted he was “partly to blame”.

Matthew Gordon was asked by Bristol Crown Court prosecutors if he was at fault for the dangerous condition of the brakes, for not having a transport manager – a legal requirement – and ultimately the crash.

He conceded partial blame, but said he had done the best he could.

Mr Gordon, 30, of Dauntsey, Wiltshire, denies 14 charges against him.

The owner of Grittenham Haulage, he is defending himself following the crash on Lansdown Lane on 9 February last year.

The court heard he did not call the emergency services after the crash and failed to tell a policeman at the scene that he owned the truck.

He said it had been a “mistake” and denied it was because he was worried about the condition of the lorry’s brakes.

The jury also heard that in the days before the crash Mr Gordon had sent a text message to his partner describing the driver of the lorry, Phillip Potter, as “slow”.

Mr Potter, 20, also of Dauntsey, denies causing the deaths by dangerous and careless driving. He is also charged with causing serious injuries to Karla Brennan and Margaret Rogers – the grandmother of four-year-old victim Mitzi Steady – by dangerous driving.

He denies a total of 10 charges against him.

Peter Wood, 55, from Brinkworth, Wiltshire, a mechanic who carried out safety checks on the truck, denies four charges against him.

In addition to Mitzi, from Bath, who was one of was one of several pedestrians hit by the lorry, Robert Parker, 59, Philip Allen, 52, and Stephen Vaughan, 34, all died in the crash in 2015.

Mr Allen and Mr Vaughan, both from Swansea, and Mr Parker, from Cwmbran, south Wales, were in a car hit by the vehicle.