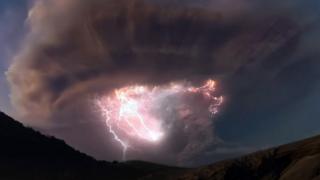 BBC ‘should have told’ viewers of doctored volcano video

The eruption of the Calbuco volcano in Chile in April was shown in the first episode of Patagonia: Earth’s Secret Paradise last month.

But a dramatic lightning storm seen above the volcano was actually shot at a different location in 2011.

The BBC said viewers should have been told a “composite image” was used.

The programme showed a violent “dirty thunderstorm”, in which lightning strikes are seen within the ash clouds from an erupting volcano.

How real-life events can delay films

Stars begin to arrive for Grammys