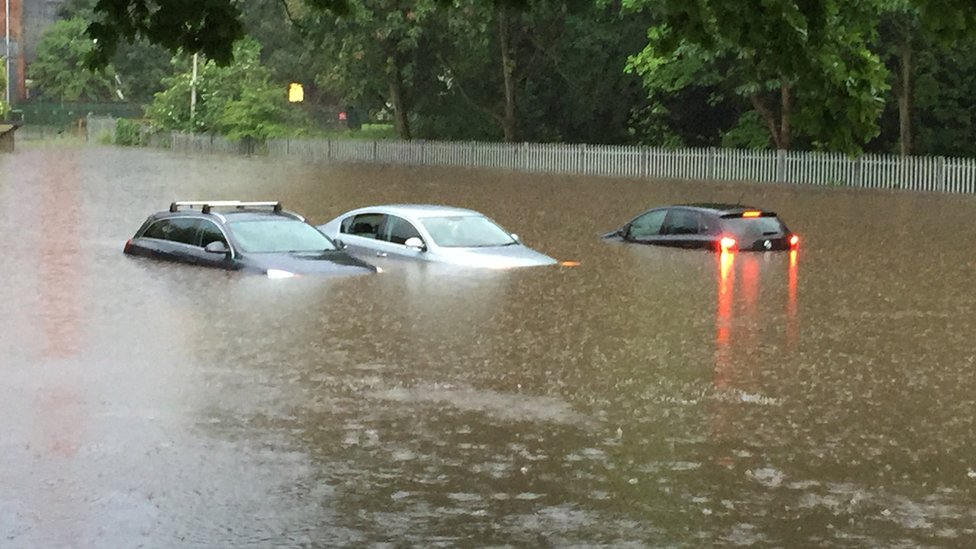 Flash flooding across the West Midlands has caused chaos with hundreds of houses, businesses, cars and main roads becoming submerged under water.

West Midlands Fire Service (WMFS) was inundated with more than 900 flood-related calls when the deluge started shortly after 18:00 BST on Thursday.

Hundreds of homes in the Selly Park area of Birmingham were flooded.

The radiotherapy section of the former Queen Elizabeth Hospital also had to be cleared of 5,000 litres of water.

It is the latest bout of flash flooding to hit the region in the last few days, with Birmingham’s Heartlands Hospital declaring a major incident when its accident and emergency department was hit.

In the latest deluge, firefighters evacuated a children’s home and helped eight youngsters into alternative accommodation.

Residents in Sir John’s Road, Selly Park, had to move upstairs when 100 homes were flooded. The nearby Selly Park Tavern was also forced to close when water poured into its cellar.

Train services were cancelled and delayed through Lye in Stourbridge because of significant flooding on the track. Bournville railway station was also badly affected.

Network Rail said the lines had now been cleared, although passengers have been warned to expect some delays on services.

Fire crews warned drivers to stay away from roads around the Merry Hill Shopping Centre in Dudley after roads became impassable.

The Environment Agency has 10 flood warnings in place. More rain is expected later today but forecasters say it should then begin to clear.

PM urged to calm the backlash against Brexit...