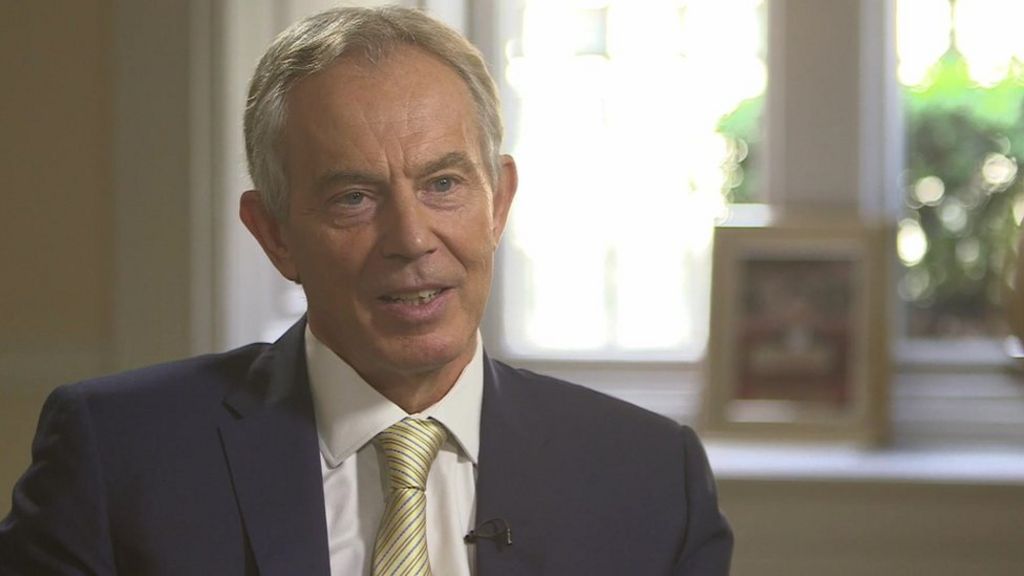 It would be a “very dangerous experiment” for the UK to give Labour leader Jeremy Corbyn power, Tony Blair has told the BBC’s This Week’s World.

The former Labour prime minister said the centre ground needed to work out how to recover and get “its mojo back”.

He also said he had “real humility” about the decisions he took on Iraq.

Mr Blair said the dislike many felt for him was less to do with the Iraq War and more to do with him winning three general elections for Labour.

“There are people who disagree with me for reasons that they say are to do with, say, Iraq, but actually are to do with the fact I won three elections for the Labour Party and they didn’t like it,” he said.

Mr Blair has been a vocal critic of Mr Corbyn in the past, warning before the left-wing MP’s leadership election victory that the party risked “annihilation” if he won.

In an interview with the BBC’s This Week’s World, Mr Blair – Labour leader from 1994 to 2007, and PM for 10 of those years – dismissed the idea that Mr Corbyn’s election as party leader was a direct rejection of him and his policies.

“No,” he said, “I think it’s a result of the way the world works these days. But it’s a big challenge for the centre… It would be a very dangerous experiment for a major western country to get gripped by this type of populist policy-making, left or right.”

He added: “I do think the centre ground needs to work out how it recovers… gets its mojo back and gets the initiative back in the political debate, because… these guys aren’t providing answers, not on the economy, not on foreign policy.”

Sir John Chilcot’s long-awaited report into how UK forces came to participate in the US-led invasion of Iraq in 2003 and its aftermath, is to be published on 6 July.

Ahead of its publication, Mr Blair told This Week’s World: “I have a real humility about the decisions that I took and the issues around them.

“I was trying to deal with this in the aftermath of 9/11 and it was very tough – it was very difficult.”

The former PM, who set up a foundation which works to promote greater understanding between the world’s religions and to challenge extremism and prejudice, said the West was not to blame for the situation in …read more