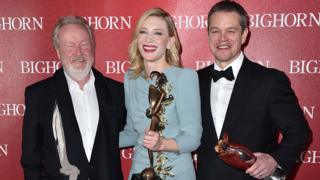 Damon, who starred in Scott’s film The Martian, said of Scott: “I hope that this is his year”.

Carol star Blanchett thanked the festival for giving its honourees “a moment of glory” even if “we are not nominated for any other award”.

Mrs Doubtfire musical in the works