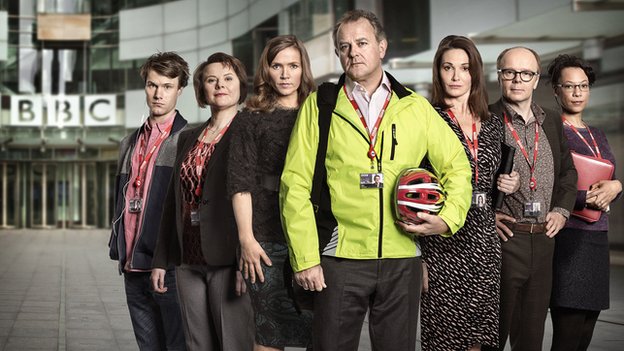 Downton Abbey star Hugh Bonneville is to reprise his role in BBC mockumentary W1A, which is to return for a second series next year on BBC Two.

In the new series, Fletcher will have to deal with the issue of the BBC’s charter renewal which is due in 2016.

“We’re overwhelmed and privileged to have Ian Fletcher return,” said the BBC’s Myfanwy Moore. “We just need to find him a desk.”

Shane Allen, controller of comedy commissioning, added: “There’s an all-too-painful yet comedic delight in [writer] John [Morton] and his ability to pick away at the scab of modern corporate piffle and bureaucratic absurdity.

“We can’t wait to see what dysfunctional madness lies ahead for Ian Fletcher and colleagues in this sly fiction,” he added.

Bonneville’s character Fletcher also gave his response to the cameras being allowed to film his everyday work again.

“I am very happy to have the cameras back. Being Head of Values is all about re-setting the dial for the BBC and perhaps about shining a new light on that dial, or at least shining the old light but with a new bulb, so none of us can be in any doubt where the dial is or can have any excuse for not being able to read what it says,” he said.

Fletcher was also at the centre of Twenty Twelve, a spoof documentary which looked at his role in organising the London 2012 Olympics.

The new series of W1A – named after the postcode of BBC Broadcasting House in London – will be shown in one hour-long instalment and three 30-minute episodes.

The BBC said the show would have a topical twist when it begins filming.

Will Smith reunites with Bel-Air pals

Lily Collins: Phil Collins was 'not the dad...