Bono and U2 performed acoustically on Italian television this week

U2 frontman Bono has said sorry after their latest album was automatically added to the libraries of all iTunes users around the world.

Speaking in a session on Facebook, the star said the move was a “drop of megalomania, [a] touch of generosity”.

In response to a questioner who told him it was “rude” to impose their music upon everyone, Bono said: “Oops, I’m sorry about that.”

Some users complained that the 11-track Songs of Innocence had been added to their music library without permission and that it was not clear how to delete it. 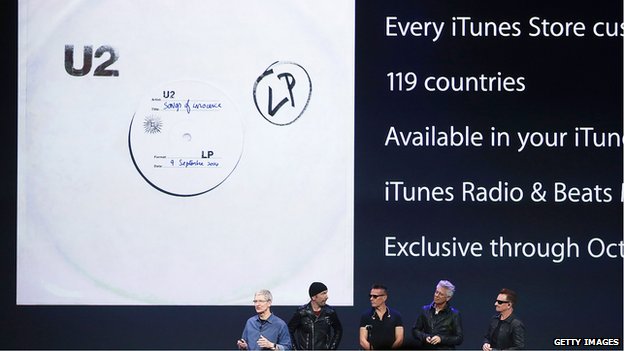 The questioner on the Facebook session said: “Can you please never release an album on iTunes that automatically downloads to peoples playlists ever again? It’s really rude.”

Bono replied: “I had this beautiful idea and we got carried away with ourselves. Artists are prone to that kind of thing.

“Drop of megalomania, touch of generosity, dash of self-promotion, and deep fear that these songs that we poured our life into over the last few years mightn’t be heard.

“There’s a lot of noise out there. I guess we got a little noisy ourselves to get through it,” he said.

The music was made available for free to more than 500 million iTunes customers in 119 countries last month. It has been reported that around 5% of those have downloaded U2’s latest opus.

At the time, Bono acknowledged that not everyone would appreciate the move.

“For the people out there who …read more

Writers' Strike: Are US TV shows about to...

The night the clubs fell silent (for a...

Spice Girl Geri Horner to look back on...

Ozzy expects to 'shed a few tears' at...