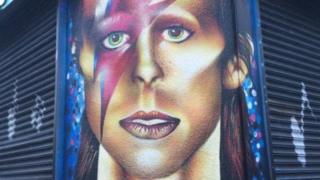 A David Bowie tribute mural created by a Sheffield graffiti artist has been ridiculed by some social media users.

A 7ft (2.1m) painting by Trik featuring Bowie in the persona of his character Aladdin Sane has appeared on a street corner in the city centre.

One Twitter contributor remarked, “How did you find an artist with no idea what Bowie looked like?”, while another asked, “Who is that a picture of?”

Trik said he found it all “fun”, but he might now paint over the picture.

More on this story and others from South Yorkshire

Of Monsters And Men – Wolves Without Teeth (Official Lyric Video)