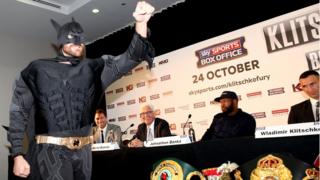 Boxer Tyson Fury has revealed that he has ambitions to be the next MP for Morecambe and Lunesdale.

The heavyweight boxer is hoping to fight for the constituency, currently held by Conservative David Morris.

He told the BBC it was a genuine ambition and he would stand as an Independent.

Supermarket in talks over milk prices

Dozens of 999 calls from Sports Direct