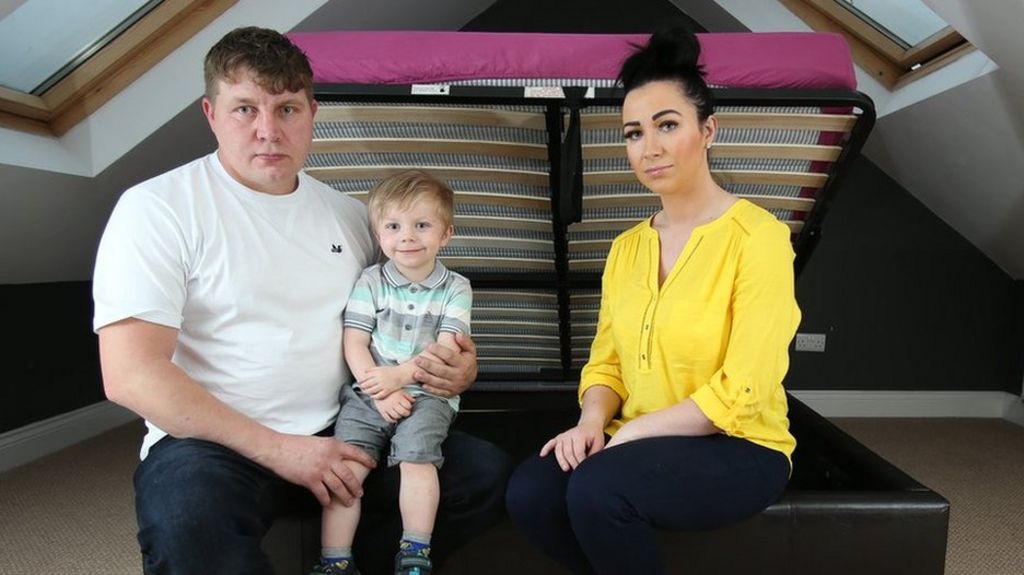 A two-year-old boy was found hanging and unresponsive after his neck became stuck in a loop on his parents’ lift-up bed.

She tried to revive him before he was rushed to hospital. He has since made a full recovery.

Ms Hames, from Kirk Hallam, has warned other parents about the bed’s dangers.

She said: “I was in the bathroom and thought Buddy had gone quiet so I shouted up to him but got no response.

“I had a gut instinct something was wrong so rushed to our bedroom where he’d been playing and found him hanging by his neck from the bed’s lifting loop.

“He was blue in the face and not breathing – I was frantic.”

Ms Hames and Buddy’s father Anthony Ancliff, have warned other parents about the lifting loops on ottoman-style hydraulic beds.

“We don’t want anyone else to go through what we’ve been through this week,” said Mr Ancliff.

Derbyshire County Council, whose trading standards team is investigating, said the bed had a 1ft (30cm) loop which is pulled to start the lifting action before the hydraulics take over.

The authority said it was speaking to the Bed Federation about suspending “the supply of similar products currently available” and having them modified to remove the loop.

Councillor Dave Allen said: “It appears Buddy had managed to trigger the lifting process but his slight weight was not enough to prevent the mattress continuing to rise when his neck got caught in the lifting loop and he was pulled upwards.

“The strap effectively created a ligature that lifted him off his feet and it is only the fact that his mother found him in time that we are not dealing with a terrible tragedy.”

Ilford party stab victim 'may have been stopping...