Boy, 3, rescued from sinkhole on Exmouth Beach in Devon 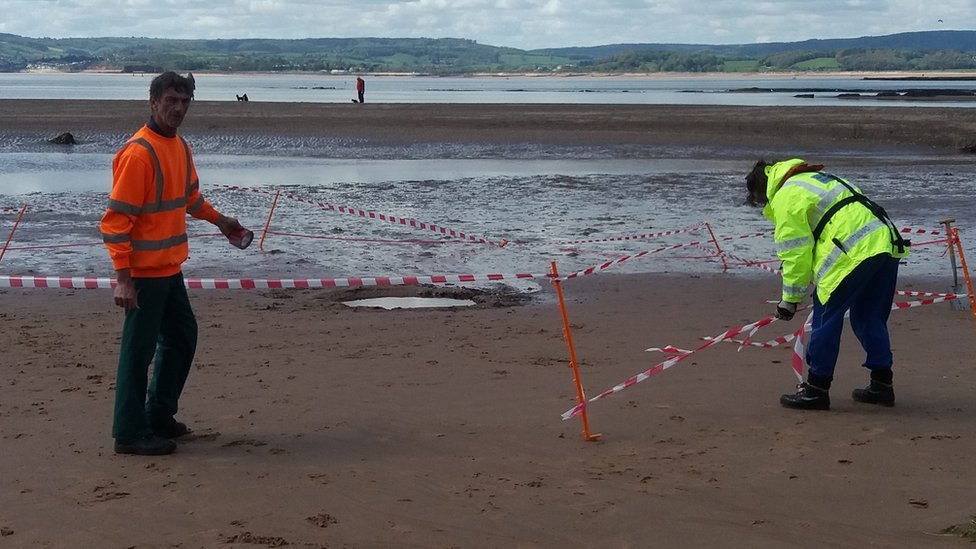 A young boy has been rescued after falling into a large sinkhole that he mistook for a puddle on a popular beach in Devon.

The three-year-old was submerged up to his waist in the the sinkhole in Exmouth Beach on Wednesday morning.

He was pulled out uninjured by his father, the Maritime and Coastguard Agency (MCA) said.

The coastguard agency erected a safety cordon and a 100m (328ft) exclusion zone on the west side of Orcombe Point.

More on sinkhole and other Devon and Cornwall stories

The MCA is advising people to keep away from the area.

The boy’s father, who is a structural engineer, recognised it as a sinkhole and called the emergency services.

East Devon District Council which has responsibility for the beach said: “Our officers are continuing to monitor the sinkhole on a daily basis and will ensure that the cordon remains in place until South West Water (SWW) begin repairs on site.”

It said SWW was erecting temporary fencing panels in the area and the pipe was being repaired as a matter of urgency.

Coastguard Matt Helm said: “These things are dangerous, but people shouldn’t be put off going to the beach. They just need to be aware that they do crop up in this area.”

Dean Hartley jailed for killing Karl Swift with one punch