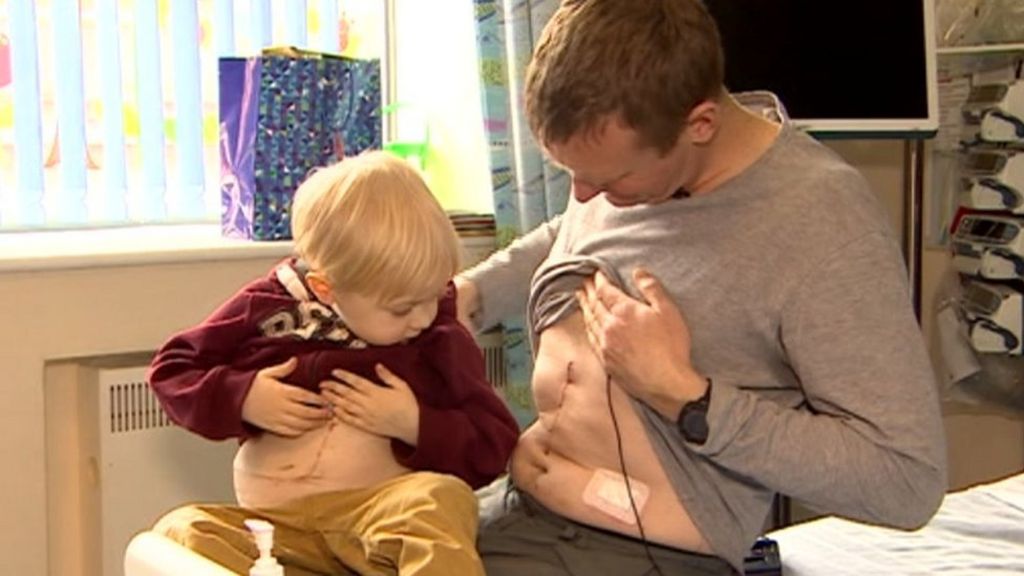 A father who gave part of his liver to his four-year-old son has said they are both doing well after the transplant.

Harry Maceachen from Shrewsbury was born with a rare liver disease and has just undergone his second transplant.

His father Simon was a living donor as no suitable match could be found from the organ donor register.

Mr Maceachen said: “It’s a big operation for a four-year-old and he’s getting very tired – he’s not normally like this.”

More on Harry’s story and updates from Shropshire

Harry’s usually boisterous character was illustrated in a show-stealing appearance on BBC Breakfast in December, when his infectious laughter and excited energy captured hearts and distracted presenters.

Harry was treated at Birmingham Children’s Hospital while his father stayed at the Queen Elizabeth Hospital in Birmingham – with mother Clare travelling between the two.

“We’ve had a lot of family support which has made a big difference,” Mr Maceachen said.

It felt “amazing” to be going home after two weeks in hospital with Harry, said Mrs Maceachen.

“We are obviously going to be in and out a lot over the next few weeks because they will keep a very, very close eye on Harry and his progress,” she said.

“But it will be really nice to go home and sleep in our own bed and sit on our own sofa and watch out own television.”

Harry was born with biliary atresia which meant he had blocked bile ducts.

He had his first liver transplant aged one but experienced a rare mechanical failure, Mrs Maceachen said.

She said “hopefully” he would not need another transplant.

“We’ve explained to Harry what is going to happen and I think it’s been easier for him to understand he is going to be having part of daddy’s tummy rather than the alternative.”

Mr Maceachan is a volunteer at Shrewsbury Parkrun and he and his family fundraise for the Children’s Liver Disease Foundation.