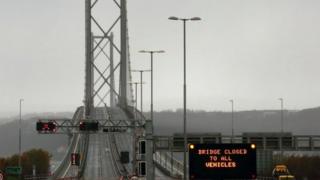 The bridge has been closed to all traffic since midnight

Traffic queues have reached 11 miles on alternative routes after the Forth Road Bridge was closed by structural faults.

Transport minister Derek Mackay said it was too early to say how long it would be closed but it would be “not just today”.

The total closure came into force at midnight with initial guidance it would remain shut for at least 24 hours.

Early on Friday morning, 11 mile tailbacks have been reported approaching the Kincardine Bridge.

Labour MPs could vote against leadership on Brexit