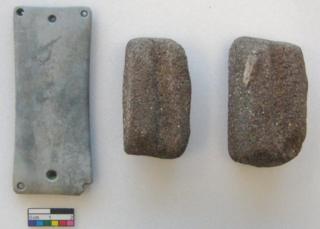 From the section Wiltshire

A Bronze Age cremation burial has been discovered near Stonehenge after being accidentally dug up by a badger.

Objects found in a burial mound at Netheravon, Wiltshire, include a bronze saw, an archer’s wrist guard, a copper chisel and cremated human remains.

Experts believe the burial may have been that of an archer or a person who made archery equipment.

The artefacts date back to 2,200-2,000BC, senior archaeologist Richard Osgood, of the …read more