Brothers without toes get silicone feet 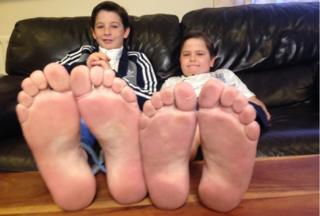 Kian and Callum Jarram and their dad Jon, from Syston, Leicestershire, are the only people in England known to have rare Adams-Oliver syndrome.

Mr Jarram raised £8,000 to pay for the silicone feet, which are not available on the NHS, via a fundraising website.

The football fan brothers, aged 11 and seven, said they could now “play and match up with the other boys”.

Battle of Orgreave: Inquiry decision due 'in October'

Dalian Atkinson: Funeral for ex footballer to be...