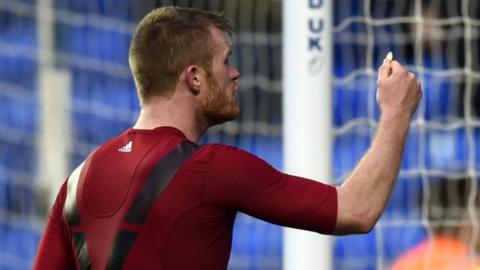 West Brom winger Chris Brunt says he is “disgusted” and “ashamed” after being struck on the face by a coin thrown by a Baggies supporter.

Brunt had gone over to give his shirt to one of the visiting fans after West Brom lost 3-1 in the FA Cup fifth round at Championship side Reading.

“If people come to football matches and think it is acceptable to throw coins at footballers or anyone else, it is disgusting,” Brunt told BBC Sport.

The FA said it would investigate.

“We strongly condemn any such behaviour and will work with both clubs and the authorities to identify those responsible,” the governing body said on Twitter.

A Thames Valley Police spokesperson said: “The incident will be dealt with as an assault and we will be working with West Bromwich Albion and Reading to resolve the issue and identify anyone involved.”

Meanwhile, the club said it would impose “the severest of sanctions” on the culprit.

The statement released read: “All our true supporters will join the club in condemning the sickening behaviour of a few individuals at the end of our FA Cup fifth-round tie.”

See all of Saturday’s action

Listen: Pulis ‘hopes fan gets what he deserves’

Northern Ireland international Brunt has been at West Brom since 2007 and has made more than 300 appearance for the side, but was left to remonstrate with his own fans at the final whistle at the Madejski Stadium.

Pedestrian dies after being hit by fire engine...