Bus and car in one-hour stand-off 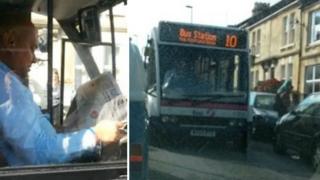 The two drivers refused to move for an hour

A bus driver involved in an angry one-hour stand-off over right of way on a road told a motorist: “You’re going to lose your… life in a second.”

The bus came head to head with a Volkswagen Lupo in Bath, with both refusing to reverse until police were called to defuse the situation.

A Facebook video shows a number of passengers on the bus during the row.