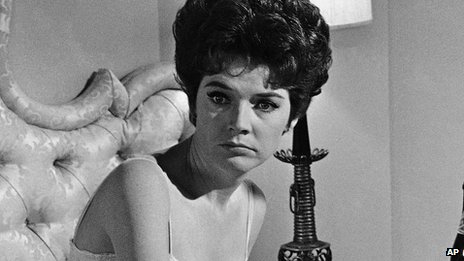 Bergen co-starred with Doris Day and James Garner in the comedy, Move Over, Darling

Polly Bergen, the actress whose fictional family was terrorised by Robert Mitchum in the 1962 film Cape Fear, has died aged 84.

Her publicist Judy Katz said Bergen, who had emphysema, died peacefully at her home in Connecticut on Saturday.

Success came early in her career when she won a Golden Globe for her portrayal of singer Helen Morgan in a 1950s series of TV plays.

Her role, as Lynette Scavo’s mother Stella Wingfield, merited an Emmy nomination to add to many award nominations and successes across a career spanning more than six decades.

A Golden Globe nomination came for the 1963 film The Caretakers.

In 1964, she played the first female US president in the film Kisses for My President.

She was later nominated for a Tony award for her role in a revival of the Stephen Sondheim musical Follies.

Another Emmy nomination came in 1989, for best supporting actress in a miniseries for War and Remembrance.

She continued to work into her 70s and played Fran Felstein, the former mistress of Tony Soprano’s father, in HBO’s The Sopranos. 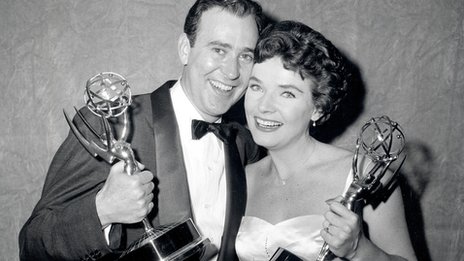 In 1958, Bergen picked up an Emmy, pictured here with Carl Reiner

Born Nellie Paulina Burgin, in Knoxville, Tennessee, her father was a construction engineer who was talented amateur singer and would later perform with Bergen when she presented her own CBS variety show between 1957-58.

She starred as Gregory Peck’s wife in the thriller Cape Fear, a role played by Jessica Lange in Martin Scorsese’s 1991 remake.

Charlie Sheen confirms he has HIV