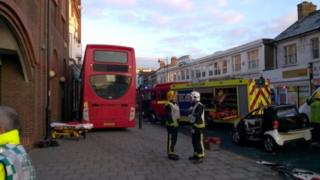 Some road closures are in place following the incident, police said

A car driver has been taken to hospital following a collision with a double-decker bus in north London.

The crash between the W8 bus and a Smart car happened at 07:40 GMT in Enfield, London Ambulance Service said.

Bus passengers were being assessed at the scene. A “significant incident” was declared by emergency services.