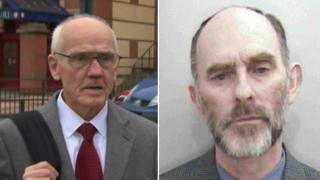 From the section Humberside

James Carragher, 75, and Anthony McCallen, 65, were convicted of a string of sexual offences in December

A former chaplain and ex-principal of a Roman Catholic children’s care home have been jailed for abusing boys.

Anthony McCallen and James Carragher, both from Merseyside, had denied 87 sex offences against children at the now defunct St William’s in East Yorkshire between the 1970s and the 1990s.

McCallen, 65, was jailed for 15 years and Carragher, 75, was told he would serve at least nine years.

Leeds Crown Court heard they “trapped” the victims and “blighted their lives”.