Cause of fatal aircraft crash probed 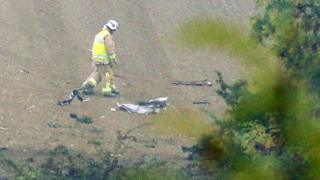 Investigations are under way into the cause of a light aircraft crash in Essex in which two people died.

The Beechcraft King Air 200 came down in a field off Gravel Lane and Miller’s Lane in Chigwell on Saturday, killing both people on board.

Essex Police and the Air Accident Investigation Branch are investigating.

The plane was owned and …read more

Anzac plot 'would have caused deaths'