Katie Morag is based on the books by Mairi Hedderwick

A nine-year-old actress who plays the title role in CBeebies show Katie Morag has become the youngest-ever winner at the Bafta Children’s awards.

Cherry Campbell was named best performer at the awards.

The show, about a feisty and independent girl who lives on a Scottish island with her family, also won the award for best drama.

Cherry was seven when she started making Katie Morag – based on the books of Mairi Hedderwick.

“She brought herself to the screen – she’s amazing,” the show’s director Don Coutts said.

Speaking backstage, the young actress said she was “speechless and nervous” after her win.

The show had been named children’s programme of the year at the Scottish Baftas, when those awards were announced last week.

This year’s Bafta children’s awards ceremony was hosted by Doc Brown at the Roundhouse, in London, on Sunday night. 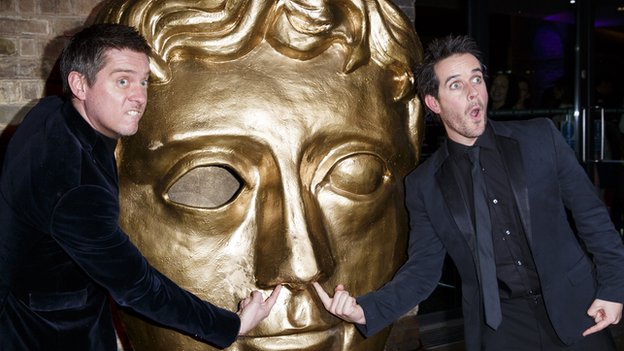 Bogeys! Dick and Dom have enjoyed an 18-year working partnership

Another double winner was duo Dick and Dom – Richard McCourt and Dominic Wood – who won the presenter prize, while their show Diddy Movies 2 scooped the comedy category.

The pair, who won two Baftas 10 years ago, said they felt “so privileged and so happy” to have repeated that success.