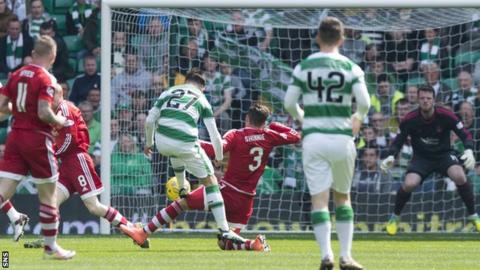 Celtic sealed a fifth successive league title but only after a second-half scare from their closest challengers.

Their triumph was already an inevitability, but the celebrations began in earnest as Patrick Roberts scored two fine early goals.

Aberdeen, who offered a stout challenge all season, looked dead and buried when Mikael Lustig scored after the break.

But quickfire goals from Niall McGinn and Andrew Considine took some of the gloss off the title party.

Ronny Deila, who will leave Celtic at the end of the season, went into the game with his side holding a nine-point lead and a vastly superior goal difference, with only three matches remaining.

The Dons – runners-up for a second year running – knew even a first league victory at Celtic Park since 2004 would have no bearing on the destination of the Premiership trophy.

But Derek McInnes was determined to beat Celtic for a third time this season, to reaffirm his belief that they have narrowed the gap.

Had Niall McGinn not directed a shot wide from point-blank range inside the opening five minutes, they may have had a chance of doing so. As it was, Celtic went on to be utterly dominant in the first period.

Call to punish GPs over antibiotics