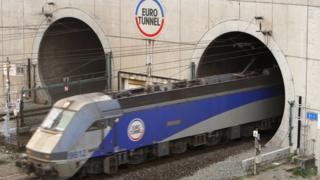 Eurotunnel services for passengers and freight have been suspended because of an “incident” in the Channel Tunnel.

Eurotunnel said all its Le Shuttle freight and passenger services between Folkestone and Calais were affected.

A posting on its website at 00:20 BST said the issue was “being resolved”.

A man died on Wednesday after being found unconscious beside the tunnel’s tracks, the 13th migrant to die trying to reach Britain since late June.

He was the fourth person to have died in similar circumstances in September.

On Tuesday, it was reported that a 20-year-old Iraqi man had been found dead in a UK-bound lorry.

And last week, a teenager, thought to be from east Africa, was killed by a freight train near the Channel Tunnel entrance in Calais.

Days earlier a man died when he was electrocuted at the tunnel entrance.