The star also scored four number ones with Girls Aloud

Pop singer Cheryl Fernandez-Versini has become the first British female solo artist to have five number one singles in the UK.

Her latest song, I Don’t Care, entered the Official Charts in pole position on Sunday.

The 31-year-old overtook Spice Girl Geri Halliwell and Rita Ora, who both have four chart-toppers.

“To be honest, I’m a little bit shell-shocked,” she told BBC Radio 1’s Jameela Jamil, who revealed the record.

The star gave the credit for the chart achievement to “my supporters and the fans that have done everything they could to get it here”. 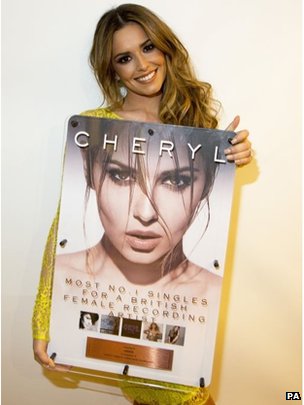 Cheryl received a special plaque in honour of her chart achievement

She previously scored four number ones with her former band, Girls Aloud, between 2002 and 2008.

And while she holds the chart record for a British female artist, Fernandez-Versini has a long way to go before she can beat Madonna, who has 13 UK number ones, and Rihanna, who has eight.

Elsewhere in the charts, Tom Odell scored a new entry at 21 with his cover of John Lennon’s Real Love, which features on this year’s John Lewis Christmas advert.

And John Legend’s ballad All Of Me rocketed back up the charts from 26 to number four after an appearance on last week’s X Factor.