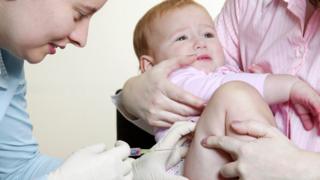 The proportion of two-year-old children in England having the MMR vaccine has fallen, according to NHS statistics.

The Health and Social Care Information Centre said the figure was 92.7% in the previous year – which was the highest level of coverage ever achieved.

Some parts of the country had less than 80% of children immunised against the infections.

The target rate is 95%, which is enough to prevent the diseases spreading in a community.

A completely discredited health scare linking the MMR jab to autism led to immunisation rates plummeting a decade ago.

Viola Beach were 'living the dream'

Sex crime suspects 'should be protected'

Tube strike: Drivers to go on strike in...