Children in Need single number one 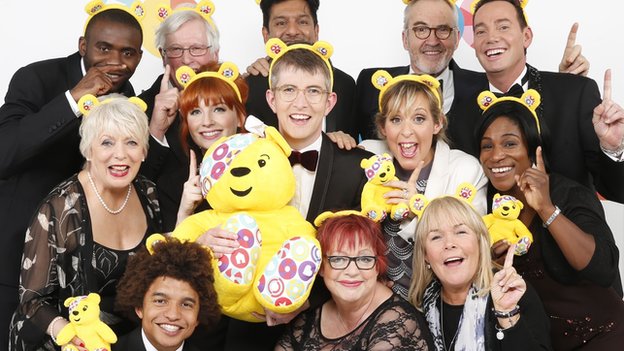 The official BBC Children In Need single has topped the UK top 40 chart.

The cover of version of Avicii’s Wake Me Up was sung by choirmaster Gareth Malone’s All Star Choir.

Great British Bake Off host Mel Giedroyc, actress Linda Robson and ex-footballer Fabrice Muamba were among the celebrities who formed the choir.

They performed the single during Friday night’s Children in Need event, which raised £32.6m to help disadvantaged children and young people in the UK.

The All Star Choir’s single was released on Monday and went straight in at number one. Its combined download and streaming tally reached 120,000, and it was also the most physically purchased single of the week.

They were joined by children from various music projects across the UK who have been supported by Children in Need.

It was Malone’s third number one, following 2011’s Wherever You Are by The Military Wives and 2012’s official Diamond Jubilee single Sing by Gary Barlow.

He said: “When we started singing, getting a number one seemed an impossible dream, so to see this group of unlikely choristers at the top of the charts today is amazing.

“I’m so grateful to the British public for getting behind it, and am extremely proud to be number one, with this choir, in Children in Need week. It’s wonderful that so many children helped too, by being on the record.”

Wake Me Up beat Ed Sheeran’s Thinking Out Loud into number two, while One Direction’s were at number …read more

How To Get The Job You Want