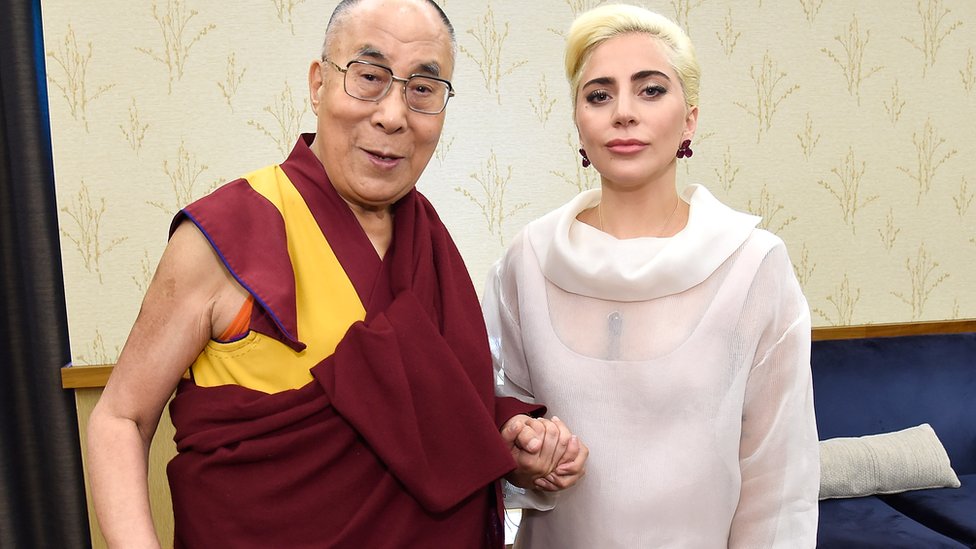 Chinese fans have reacted with outrage to Lady Gaga’s meeting with the Dalai Lama over the weekend.

Her social media posts about meeting with the Tibetan spiritual leader on Sunday have led to online speculation over whether she will still be allowed to perform in the country.

Lady Gaga is one of, if not the most, popular western musician in mainland China.

Yet she has irked mainland fans by showing her support for the Dalai Lama, who many feel is a figurehead for Tibetan separatism.

The Dalai Lama says he now advocates a “middle way” with China, seeking autonomy but not independence for Tibet.

‘Has not considered Chinese fans’

Lady Gaga’s popularity in mainland China means that she is often a major talking point for entertainment and mainstream media there.

However, such media have been notably quiet on her 26 June meeting, meaning that it largely went unnoticed.

But fans have been determined to talk about it. More than 2,000 users have reacted to one prominent user MusicWars’s post about the story, calling for “rational views on the matter”.

Many have been quick to condemn Lady Gaga, asking whether she is “stupid” or “ignorant” on the subject of Chinese political sensitivity.

“She has not considered Chinese fans,” says -GeorgeLee-, receiving over 1,000 likes.

DIZzyF says “she has given up on the Chinese market” and Svaniscono7 accuses her of causing controversy to stay relevant in a waning market. “The political depths this turtle will go to, to stay ashore,” she says.

Yet lotusb defends her, saying “she should not be ashamed” and adding that some of her fans had “gone over the Chinese firewall” to find out why she met the Dalai Lama, and then tried to “painstakingly explain …read more

Finding Dory remains top of the US box office

Alexandra Shulman: How her time at Vogue shaped...