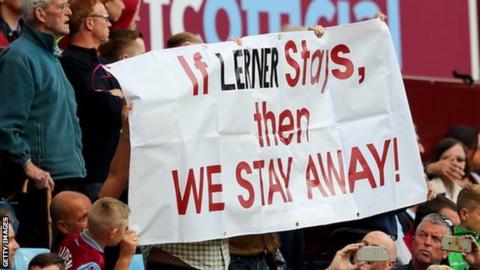 The deal, which is subject to Football League approval, would see Xia take 100% ownership and become chairman.

A club statement said Lerner “sought the right owner to take care of the club and restore fortunes” and believes Xia is an “excellent choice”.

The Midlands club’s new manager – likely to be Nigel Pearson or Roberto di Matteo – will be announced shortly.

Xia needs to pass the relevant owners’ and directors’ test, and provide proof of finance before formally completing his takeover.

BBC Sport’s Pat Murphy told BBC Radio 5 live: “Randy Lerner’s tenure at the club is over. The new chairman is a prominent businessman and a seriously impressive business leader in China.”

Villa will play in the Championship next season following their relegation from the Premier League.

They finished bottom of the table with 17 points, sacking manager Remi Garde at the end of March.

Who is Dr Tony Xia?

He is the owner of Recon Group, a holding company that has the controlling interest in five publicly listed companies on the Hong Kong and Chinese stock exchanges, employing 35,000 people in 75 countries.

Xia played football until he finished at college and the sport has remained his passion. He became a Villa fan “many years ago”, according to the club’s statement, and is “delighted” to become its owner.

What are his objectives?

His first target is to return Villa to the Premier League. After that, he intends to lead the club into the top six, bringing European football back to Villa Park.

He also plans to make Villa the most famous football club in China with a huge fanbase.

'Wards run down' ahead of Devon Hospital bed...