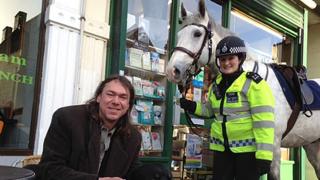 A homeless man has bought chocolates and a Christmas card for a police officer who helped his injured dog on her last shift before retirement.

Rocco, a Rottweiler, had broken free of his leash and run in front of a car, injuring his hind leg.

PC Lou Richards found him while working her last shift in the mounted branch of the Metropolitan Police.

She managed to track down a vet who treated …read more